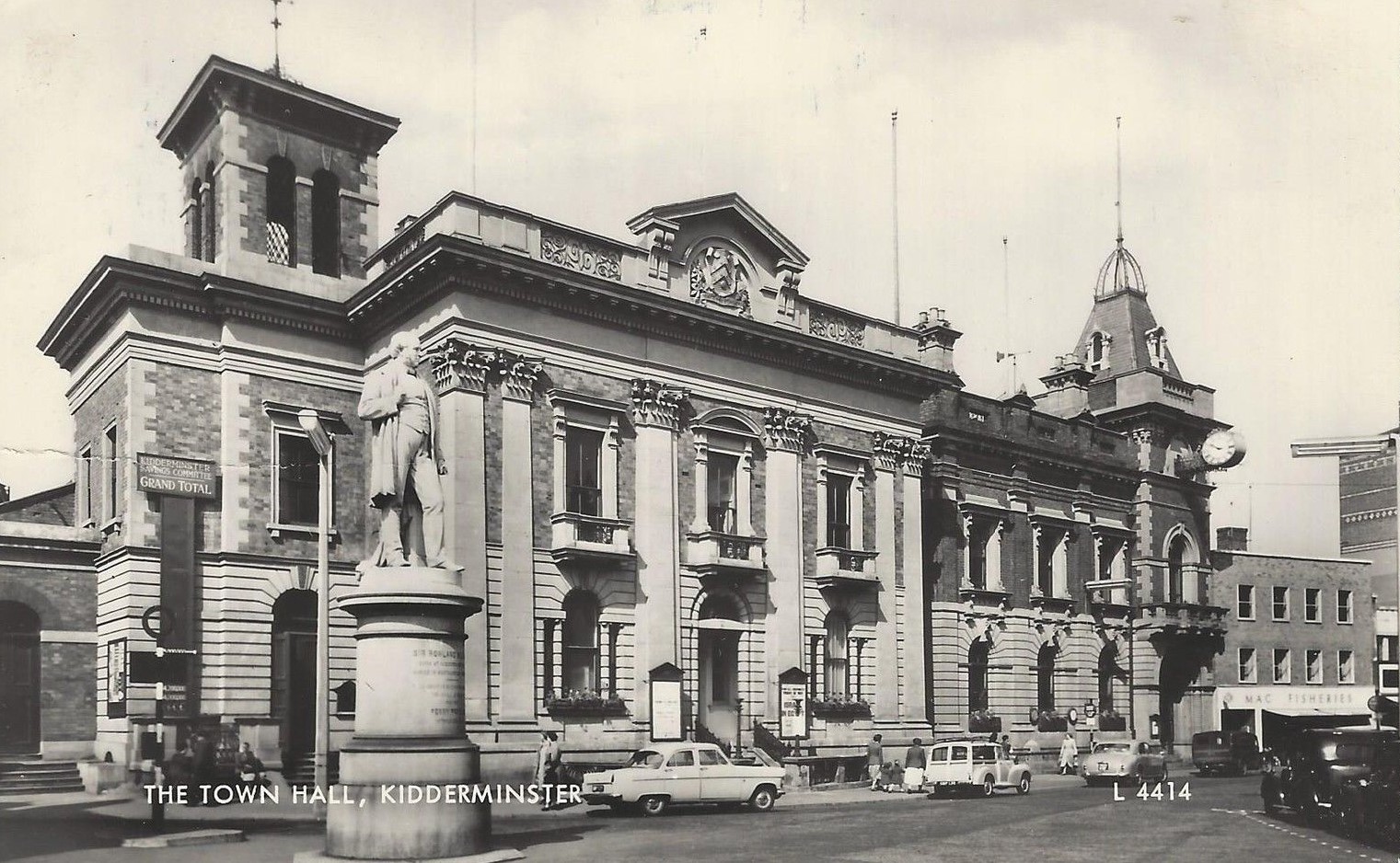 So what do we have here? A Ford Consul Mk II,  Morris Minor Traveller and Riley Pathfinder outside Kidderminster Town Hall and near to the statue of Sir Rowland Hill, without whom we might never have had any postcards.

Actually the link is a little tenuous, but without Hill we would not have had the Penny Post which made it affordable for the man and woman in the street to send letters by post. That was back in 1840. I don’t know why it took another 30 years before we saw the first plain postcard and a further 24 years until we were allowed to post a picture postcard by itself, not encapsulated in an envelope. Anyway, it was because of the Penny Post that we see Sir Rowland on his plinth in Kidderminster today.

But what caught my eye was that Traveller. I think it is a trick of the light, but it looks as though it does not have a fully wooden framed rear end. Odd I thought. So I started looking to see if it was a special model. In fact I think it is all there but the light makes it appear otherwise, but the more you look at Travellers, the more intriguing is that woodwork. I used to think, because of the metal panels within it, that it was simply cosmetic, but now realise that it’s what keeps the roof on! So it is a proper woody, which I have written about before – A Hampshire Woody

My brother loves Travellers and if I ever win the lottery I intend buying him a restored one. You can still get the wooden frames from Woodies Classic Car Services.

However, if he ever wins the lottery, I just hope he remembers I prefer Ferraris, or even better an ISO Griffo as featured in the post A Gran Turismo lost on the Grand Tour.

Something else caught my eye in this postcard and that is the fundraising thermometer thing on the town hall to the left of the the statue.

Savings Committees were local ‘branches’ of the National Savings Movement which the government set up in 1916 to try to manage the deficit caused by the First World War.  (Interestingly an early insignia of savings committees was the swastika, but this had to be dropped after it was adopted by the Nazis).  People would save with the Committees knowing that although the return was not great, their savings were safe and this form of saving continued to operate into the seventies.  I can only guess that the Committee erected the thermometer to encourage people to save rather than to raise a specific sum. We cannot see the sum saved on the postcard but it piqued my interest and I bought another postcard of the same scene. The Consul has gone now and we have instead a Singer Gazelle, resplendent in its two tone paint, white painted steel wheels to look like white wall tyres and chrome hub caps.

The thermometer has moved up a bit now, but alas we still cannot read it.

I wandered down there today and took a picture. No cars any more as Vicar Street has been pedestrianized and no thermometer, but they have stuck a Penny Black onto the signpost.

We got a little off topic with this one. If you want to see more Travellers, check out these past posts – Travellers or Countrymen?, Mystery at the end of the Pier and finally No Imports for Fordingbridge.  For Woodies see Back in Felpham and of course  A Hampshire Woody