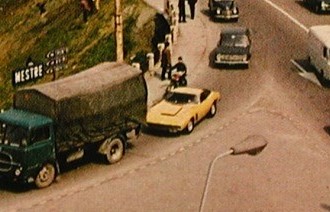 Posted on
2 years ago4 months ago
Tagged
Iso

It never ceases to amaze me what you see in postcards or why people ever bought some of them. Why would anyone ever send this one? Does it look nice? Is it a pleasing composition? Will your friend want to pin it to her kitchen pinboard or stick it on the fridge with a magnet? Perhaps it’s aimed at lorry enthusiasts or lovers of grey concrete. What’s all that stuff at the bottom of the grassy bank? Rubbish? Where is this anyway? It says Mestre on the sign on the corner (just above the lorry). Where’s that? Venice! Venice? Well the mainland part anyway… “Mestre is the centre and the most populated urban area of the mainland of Venice, part of the territory of the Metropolitan City of Venice” according to our friend Wikipedia. Well, I still don’t like the look of it.

However, I do like what you can see in amongst all the clutter; that bright yellow car behind the truck. It’s an Iso Grifo! An Iso Grifo, that rarest of rare exotica trundling around behind a dirty old lorry in the not so nice part of Venice in the middle of the afternoon.  I had a model of one when I was a boy, though not one with the raised bonnet which makes this one so easy to identify. Some people call that raised bonnet a ‘penthouse’, others a power bulge (though it’s too angular to be a bulge IMO) and others call it a power scoop. When it was launched in 1965 the Grifo did not have one. Then it was powered by a V8 Chevrolet engine of 327 cubic inches as they say in Detroit or 5.4 litres as we say in the UK and used to say long before we joined the EU. (Why? There’s probably a reason. Though perhaps not. We buy our fuel in litres these days but still talk about miles per gallon. No, there’s no logic to any of it.) That small block Chevy motor fitted nicely under the streamlined bonnet of an exquisitely designed perfectly harmonious automotive shape, but Ferrari had the Daytona and Maserati the Ghibli so Iso upped the ante and stuffed a big block Chevy in there, a 390 bhp 7000cc (427cubic inches) monster which required a little more headroom, hence the penthouse on top. This was in 1968. The factory claimed a top speed of 186 mph, well 300 kph because they were Italian, but they probably didn’t talk much about the economy. My 1972 Observers Book of Automobiles lists the fuel consumption of the smaller engined Grifo as “15 mpg approx”. What would the 7 litre have done to the gallon? 12?  8 around town? It was a good idea at the time though. Fantastic looks courtesy of Giorgetto Giugiaro at Bertone and brute force and reliability courtesy of General Motors. However, even the richest car nuts got cold feet in 1973 when the oil crisis hit us and fuel prices soared and Iso closed their doors the following year. It had been a great adventure and one that we will never forget.

Like many postcards the printing quality is not great and so it is difficult to see this Grifo clearly. Clearly it is a Grifo with a penthouse which makes it one of only 90 cars, but I have a feeling that this one is one of the Series II cars making it rarer still. The Series II differed from the original in that they had hooded headlights. That’s what I’m seeing here I think.

Or could it be the ultra rare Ford engined Iso Grifo?

Yes, after the seven litre car Iso used an even taller Ford engine and the penthouse got even higher. This was in 1972 the year before the end. I’ve been unable to discover just how many Ford engined Series 2 cars were built, but it can’t have been many.  I’m just amazed that here we have one in my postcard, caught in an unassuming moment on a mundane corner behind a slow moving truck in the unattractive part of Venice. I wonder what became of it.

Let’s finish with a view of the rear and the very best rear window ever made and a short film by CineCars.

One thought on “A Gran Turismo lost on the Grand Tour”