Romeo and Juliet by the Lake 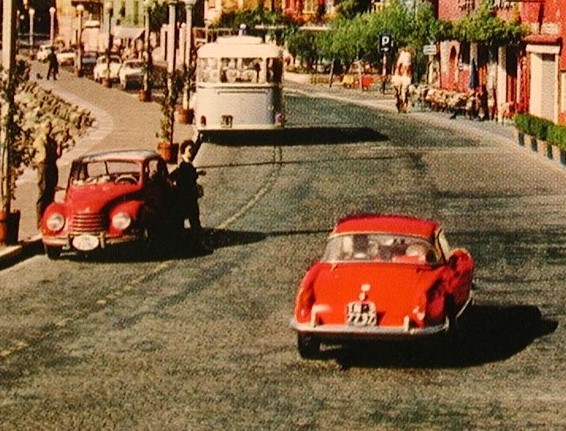 It’s all fuzzy I know (it’s the printing) but it’s a red Alfa Romeo Giulietta Sprint in the sunshine with red geraniums in the foreground, mountains in the background and a blue sky overhead.  For once it looks as though the postcard photographer paid attention to composition. I want to be there. Where? Torbole on Lake Garda in northern Italy.  Looks much the same today.

It’s difficult to tell when this photo was taken. The Alfa was made between 1954 and 1965 and the West German DKW Meisterklase on the left is a fifties car. What we do know is that it was posted to Mr and Mrs M Van Gysegem in Brussels on 23 July 1969.

An interesting fact about the little Alfa is that the Giulietta came long before its big sister the Giulia, which only appeared in 1964. Normally one would assume the diminutive form is borne of a full size version. Kitchen/kitchenette, laundry/launderette, cigar/cigarette, maison/maisonette. Stop me! Stop me! Anyway, can you think of any other ettes or ettas that arrived before they should have?

PS It’s good to see both a Giulietta and a Giulia in Alfa’s 2018 model range and also their logo once again on an F1 car.

If you liked this postcard, you may like An Italian Masterpiece and an English Artist  or A Contrast of Italian Style.