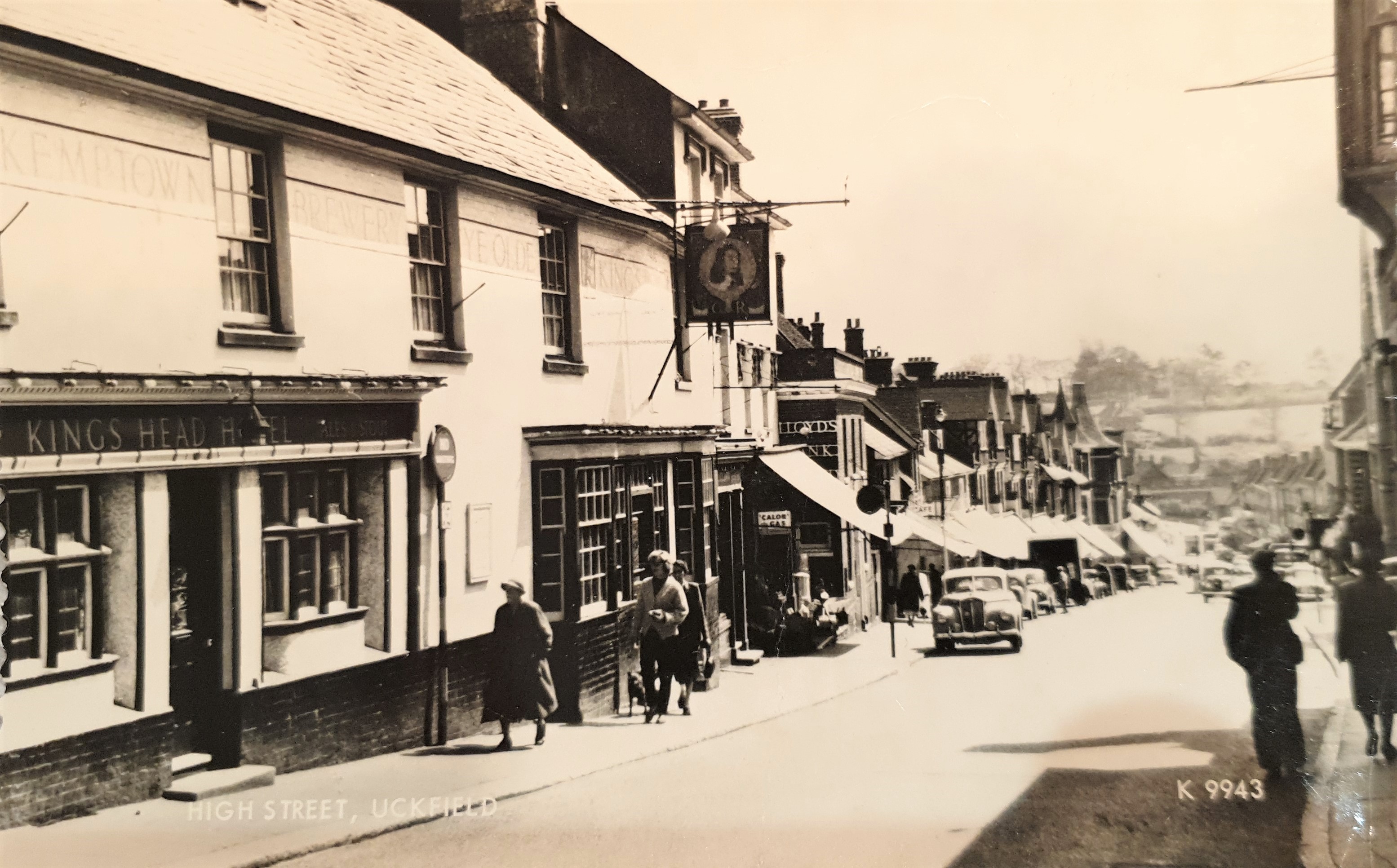 I was given this postcard by my youngest son. The car’s not that clear, but let’s see where it leads us…

The High Street, Uckfield, Surrey in the late forties or fifties and a Wolseley 6/80 (or 4/50). You often saw them in old black and white films driven by the cops, bell clanging on the front bumper, chasing after the robbers.

They’re odd cars to my mind, an unhappy marriage of angular Wolselsey at the front and rounded Morris at the back. The Morris version was a much more unified design I think, not that it was itself conceived as a whole. Issigonis designed the Morris Oxford and Minor first and then designed longer front ends for the Six and 6/80. All the cars are Oxfords from the bonnet back.

So how did we ever get such a car – A Wolseley at the front and a Morris at the back? A car that surely would have had Herbert Austin turning in his grave! For Wolseleys were Austin’s if they were anybody’s. Lord! What did he think? And I mean by that Leonard Lord, who took over the Austin Motor Company after Austin died in 1941 but who had been his arch rival William Morris’s right hand man for years until they fell out in a major way.

So, Wolseley, Morris, Austin and Lord. It’s a long story. I’ll make it as short as I can.

Let’s start in Dublin, Ireland in 1837. Here Frederick Wolseley was born. When he was 17 he emigrated to Australia to work on a sheep station and in his early thirties he began designing and building sheep shearing machines to speed up the shearing process and get the whole fleece off in one. By 1884 he was a partner in an engineering business and had patented his machine and was doing pretty well.

This was the year that Herbert Austin turned eighteen and emigrated from Oxford, England to Australia to work in an engineering company where his uncle was the works manager. In the evenings he studied technical drawing and in 1887 he got the job as works manager at the company manufacturing Wolseley’s shearing machines.

He looked at Wolseley’s invention and worked out how to improve it, took out his own patent and sold it to Wolseley in exchange for shares in The Wolseley Sheep Shearing Machine Company where he then went to work.

In 1893 it was decided to set up an operation in England and the 56 year old Wolseley and his 27 year old manager, Austin, left Australia to set up a factory in Birmingham, England.

Unfortunately for Wolseley, shortly after returning to the UK he was diagnosed with cancer and had to retire and so it was left to Austin to run the UK operation by himself. One of the problems facing the company was the seasonal nature of sheep shearing so, looking for a sideline to keep the staff busy and to ensure there was all year round income, Austin turned his attention to producing motor cars.

The company made a few cars but the directors of The Wolseley Sheep Shearing Machine Company didn’t see a great future in the automobile and after Wolseley died in 1899 they sold that side of the business to Vickers, the armaments company, who did. The Vickers’ company was called the Wolseley Tool & Motor Company and Austin was part of the deal and became general manager.

These were exciting times for young engineers and Herbert Austin hankered after designing and building his own cars so left Wolseley in 1905 to set up his own car company – The Austin Motor Company Ltd across town in Longbridge, and so was not part of the Vickers’ success with the marque, making Wolseley Britain’s largest car manufacturer by the early twenties. Don’t think though that Austin missed out. The Austin Motor Company also did rather well.

Meanwhile over in Oxford William Morris, eleven years Austin’s junior, had set up the Morris Motor Company in Cowley. Morris was a savvy businessman who recognised the cost effectiveness of Henry Ford’s production line manufacturing process and also the benefits to be had of buying in components from elsewhere rather than manufacturing everything in-house. Morris and Austin became big rivals with every large British town having both an Austin and a Morris dealership.

In 1927 Wolseley ran out of money and went into receivership. Austin wanted to buy it but it was Morris who succeeded in acquiring it. Wolseley thereafter became a subsidiary of Morris – an upmarket brand of essentially Morris cars. Hence in 1948 we have what we see in the postcard, the Wolseley 6/80 based on the Morris 6.

That really explains why the 6/80 has the back end of a Morris Oxford but it’s not really the end of the story so bear with me. There’s a postscript.

Leonard Lord, unlike Wolsley, Morris and Austin did not have a privileged background. He was born in Coventry, left school at fifteen after his father died and worked in various positions in engineering companies around the area ending up in 1922 at Hotchkiss. This was rather lucky for Lord because after the war Hotchkiss, who were famous for their machine guns, had started supplying Morris Motors with engine parts. The following year Morris bought Hotchkiss and Lord was given the job of updating the tooling. He was good at making financially astute decisions and soon came to the notice of William Morris in Oxford so that when Morris bought Wolseley in 1927 he put Lord to work updating Wolsley’s out of date factory. Lord excelled at that also, so Morris brought him over to the Morris factory in Cowley to modermise that too and promoted him to Managaing Director of Morris Motors.

Things went well. It was a good partnership, the two men worked well together, were friends and the Morris empire was very profitable. For a while it seemed as though Morris would take early retirement and concentrate on his charitable works, but he just could not relinquish the overall management of his company and he and Lord, whose ambition it was to run the company, fell out.

Lord resigned, went on a long cruise and returned in 1938 to take up a position with the enemy – the Austin Motor Company. Lord went to Longbrige as works manager to modernise the great works as he had done previously at Wolsley and Morris.

After the war and shortly after our Wolseley 6/80 was launched, Lord engineered the merger of Austin and Morris and all its subsidiaries of course, MG, Riley and Wolseley. This was BMC and although Morris was its first chairman, Lord soon took the reins and Austin and Longbridge emerged the dominant partner.

In the future Wolseley would be a badge-engineered brand designed in Longbridge’s drawing office. Where it belonged, some would say, but it’s odd to think that Frederick Wolseley never knew that his name would be forever associated with cars. His company, by the way, had to diversify as Austin had argued, and went into building supplies and Wolseley Ltd still exists as part of Ferguson plc.

Anyway, a Wolseley 6/80 in Uckfield, Surrey. The High Street hasn’t changed much. Longbridge though, once the largest car plant in Europe, has completely vanished. Demolished and redeveloped. Gone.