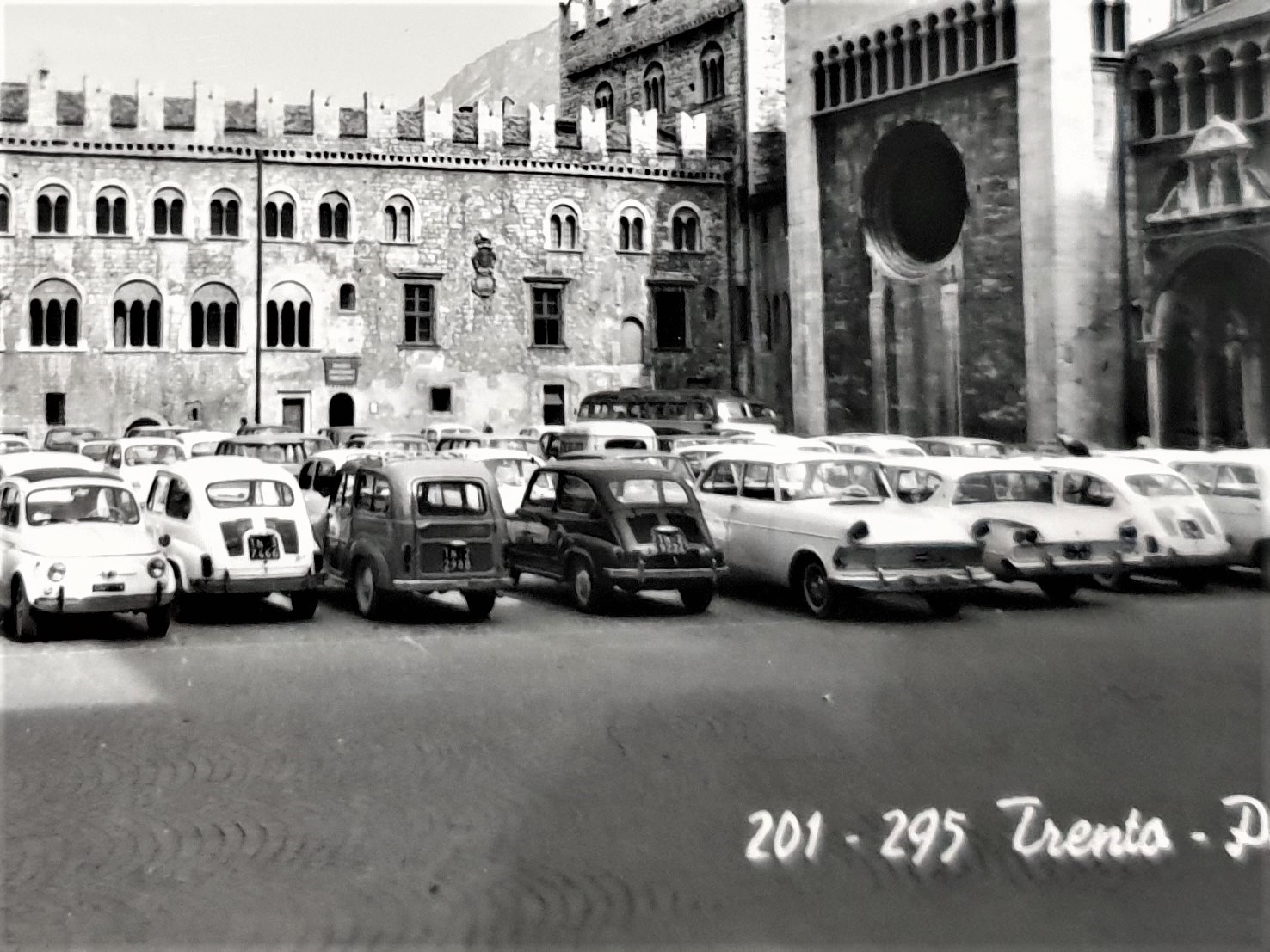 I’ve recently started postcrossing. Postcrossing is a postcard exchange project that allows people to send and receive postcards from random people all over the world. It’s free and if you want to have a go, go to https://www.postcrossing.com/.

Today’s two cards were sent to me by Katia in Italy. Katia has discovered a very small bookshop run by a very old lady in her town that has some interesting old postcards in it and she looked for some postcards with cars in them for me.

On the back of this postcard it says: Trento. Palazzo Istituto Trentino Alto Adige Per Assicurazioni. I love this modern Brutalist architecture and especially the leaning out porch above the main door and the penthouse veranda. Also the textured concrete blocks. Superb. However, despite wasting hours looking, I cannot find it on Google Maps or anywhere on the web so I guess it’s gone.

And the cars? The nearest to us is a Fiat 500c Topolina convertible I think but the car in front of that defeats me. It’s small certainly and at first I thought it was a Cinquecento estate car – a Giardiniera, but the rear door and the front and rear wings aren’t right. Regular reader Rob van der Klugt will know.

The second postcard Katia sent me is also of her home town, Trento, in northern Italy beneath the Alps.

Here we have the Piazza del Duomo in Trento. Three cars immediately caught my eye. The 7th from the left and the 9th and 10th. The 7th because I don’t know what it is, the 9th because it looks American and out of place and the 10th because it’s a Ford Consul Classic.

What’s strange is that the 7th car is the same as the car I don’t know in the first postcard. Could it be exactly the same car? That would be a coincidence, but from what I can make out of the licence plates it isn’t, I don’t think.

Now parked next to a Fiat 500 we can clearly see it it is not a sibling as its wheels are larger. The American-looking car just looks large next to all the little Fiats, but is in fact a German Opel Rekord P2. And that Ford? Such a fresh design I always think, with its sweeping but modest rear wings, its four separate rear lights and its backward raked rear window.

So thanks, Katia for two very interesting postcards.

If anyone is thinking of going to Italy, Katia writes a very good travel blog called Il Miraggio. It’s not just about Italy so check it out wherever you’re going and she displays her travel photos on Instagram.