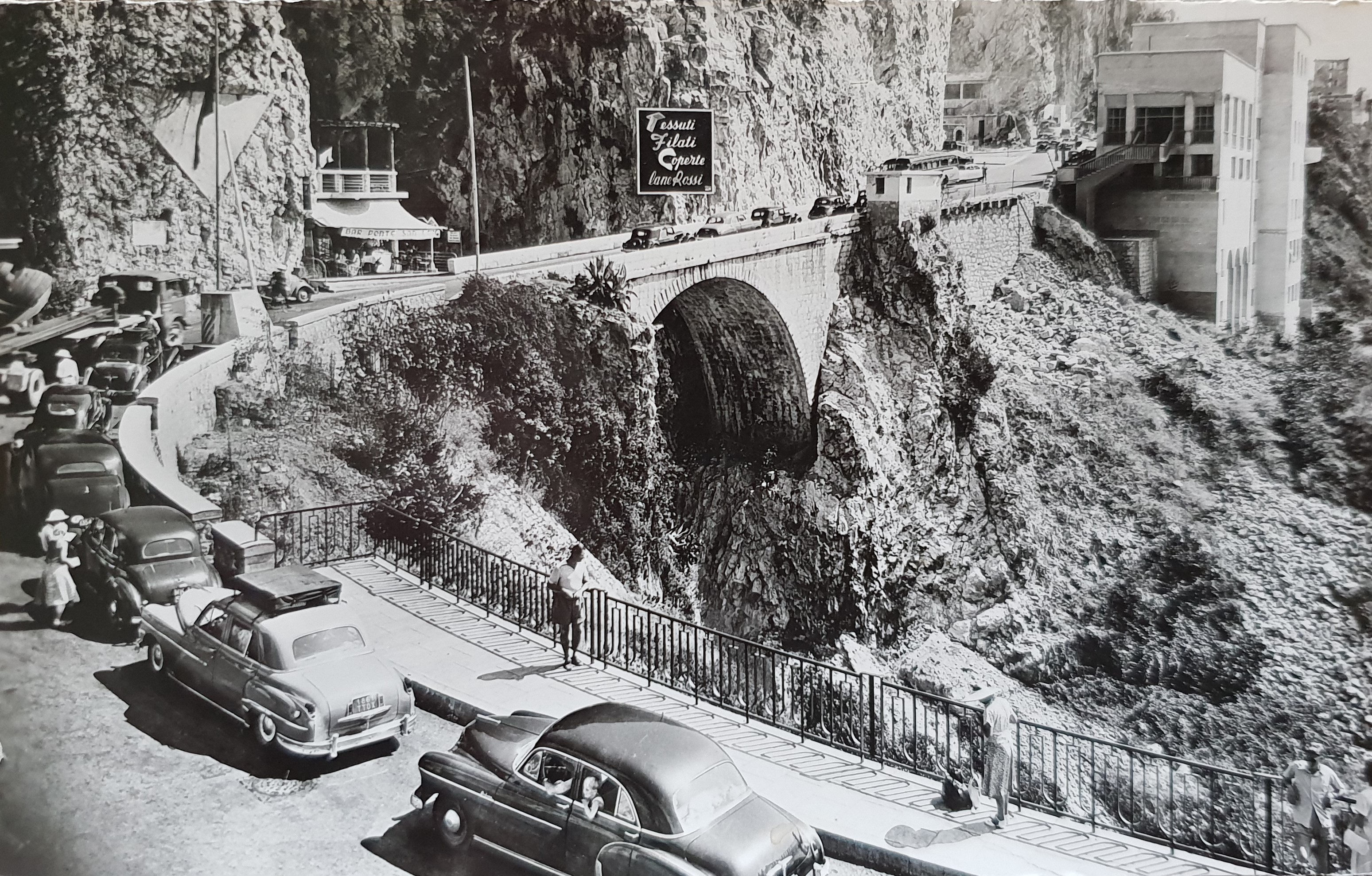 Posted on
1 year ago1 year ago
Tagged
Chrylser, Morris, peugeot

This is just outside Menton in the South of France on the border between France and Italy. I think the big triangle in the rockface on the left designates the borderline. These were the days before the European Union, the days of queuing to go through passport checks. Below is how it looks now according to Google Maps Streetview…

It’s interesting to see that bridge in context (to the sea) and how they have done some major structural work to it since the sixties. Also interesting to me is the fact that the building is still there as is the triangle in the cliff.

But this blog isn’t about changing topography, it’s about the cars. So, let’s see what we have… Working our way from the right, forward down the line…

It should be easy but I don’t know. What’s the word on the side? DeLuxe? The curves of the bonnet and the way the radiator seems to curve around should make it simple to identify.  Someone will know.  I wonder whether that little boy is still with us and remembers this fine day and going to (or returning to) Italy in his Dad’s car in the days before seat belts?

A 1949 Chrysler Royal. Is that an early style roof box?

A Morris Oxford. Is that a British number plate? Is that a backless dress?

Then we have something very large with very large chromed headlamps. A Rolls Royce perhaps? In front of that we have the streamlined shape of a Peugeot 203 (I think) and then a mystery. It should be easy to identify with that distinctive boot handle but again I don’t know. Nor do I know what that is on its roof. Strange. A spare wheel on a roof rack perhaps?

Finally, did you notice the woman taking a picture of her husband? I guess the triangle is in the background. Where is that photo now I wonder?

[ If you’re wondering why these photos have different hues, it’s because I photographed (rather than scanned) the postcard at different times and the settings on my phone and the lighting were probably different. Ideally I would correct  the images so they looked the same, but no time!]

Rob van der Klugt left the following in a comment. I’ll add it here too since comments are not always easy to find on all mobile devices and this is too good to miss. Thanks again Rob.

We’re back in 1952. After World War II life is about normal again. Monsieur Lefèbre has a succesful wine trade and takes his family for a day trip to Italy in his 1950 Chevrolet Styleline in (yes!) Deluxe version. Little boy Jacques is keen on cars and has spotted the British registration on the Morris Oxford, as well as the Monaco plate on the Hooper bodied 1949 Bentley Mk VI in front of him. The 203 Peugeot is brand new and, of course of the first type, still has the half moon shaped rear window. Considering its roof, boot, doors and windows, the car in front of the 203 must be a Citroën TA. In the distant queue, following the Austin Devon, there are two shorter TA’s, with their spare wheel shaped bootlids. Between them is another 1950 Chevrolet, a two-door-only this time. But the motor Jacques likes most is the sporty MG TD below the triangle!